Susie Keef Smith was seeking escape from a troubled home life and the havoc of childhood polio when she and her cousin, Lula Mae Graves, set out to photograph the last of the prospectors, burro packers and stage stops in the remote desert east of California’s Salton Sea. They traveled by burro, foot and Ford though sandy washes and roadless canyons, armed with a .38 revolver and a large format camera. While making postcards for the PO spinner rack, the women were remade in the wilderness and wound up creating an unparalleled portrait of one of the lesser-known deserts in the West.

Susie’s photos were nearly lost to history when–upon her death–they were tossed out by a county administrator. A savvy archaeologist jumped into a dumpster and rescued many of the photos you see here. This book presents portraits of a mysterious land along with the story of its heroic chroniclers, self-taught documentary photographers of the 1920s and ’30s.

Photographs by Susie Keef Smith and Lula Mae Graves will be on display at the La Quinta Museum January 15–May 11, 2019. The opening reception is January 24, 2019 from 5-7 pm. Also on display will be desert landscape paintings by the book’s co-editor (Lula Mae Graves’ grandson) Warner Graves III.

Postcards from Mecca: The California Desert Photographs of Susie Keef Smith and Lula Mae Graves, 1916-1936 is available on Amazon. 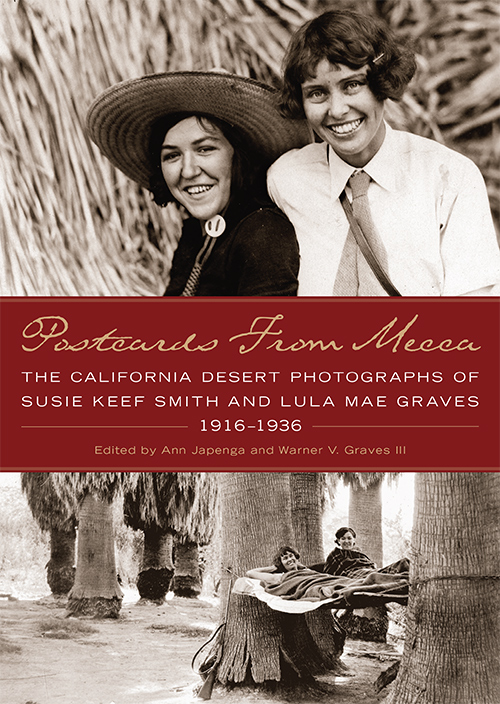 Buford Crites spent 30 years as a Professor of Communication at College of the Desert, and 20 years as a council member for the City of Palm Desert. He and Russell Kaldenberg write about Corn Springs, where Crites returns each Christmas season to decorate the gravestones of prospectors Gus Lederer and Tommy Jones.

Chris S. Ervin assisted with the Susie Keef Smith photo collection. He is Archivist and Librarian for the Santa Barbara Trust for Historic Preservation and has managed the Publications Program for the Mojave Desert Heritage and Cultural Association since 1999.

Russell L. Kaldenberg, co-author of the chapter on Corn Springs, is an archaeologist who spent 32 years in federal service including five years in the Palm Springs area where he was the public lands manager for the Bureau of Land Management. His job took him to incredible places throughout eastern Riverside County, including Corn Springs.

Steve Lech is a native Riversider who has been interested in the local history of Riverside County for more than 40 years. He has written ten books on various topics related to Riverside County history. In Lech’s essay, he discusses Susie and Lula’s postcards in the context of better-known postcard photographers Stephen Willard and Burton Frasher.

Ronald V. May, RPA is President and co-founder of Legacy 106 Inc. in San Diego. Since 1968, May has been involved in a broad spectrum of historic, archaeological, and general environmental studies in California and northern Baja California, Mexico. May writes about his rescue of the Susie Keef Smith collection from a dumpster.

Robert B. Smith Smith’s 20 years of researching and writing articles and books on Idyllwild and its surroundings have made him the area’s leading local historian. Susie Keef Smith was his father’s cousin. Smith writes about his personal acquaintance with “Cousin Susie”.